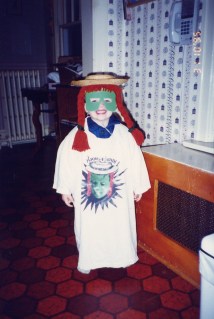 Cameron, dressed as Annekenstein for Halloween
I used to be in a sketch comedy theatre show called Annekenstein.  It ran for 7 summers, from 1991-1997 in Charlottetown.  Each summer’s production would have a fair amount of brand new material, so every spring we’d rack our brains, trying to come up with new sketches, and new ways to lampoon the omnipresent Anne of Green Gables propaganda.

In 1995, when Cameron was 3, I came up with an idea to see how a child of his age might create a sketch based on AoGG.  The premise being the question: Is AoGG part of our Island’s subconscious – that is, are we born with an innate awareness of it – or is it something that is learned and then forever etched into our brains.

So I asked Cameron, who at 3 would have had minimal insight into the AoGG phenomenon, to pretend to be Anne of Green Gables, and I would help out in any way I could.

The following is a transcript of what took place (and is, for all intents and purposes, Cameron’s very first improvised sketch comedy attempt).

This never made it to the stage.

Cameron, as Anne, is running around the living room. Frantic.

Cameron: Grrrrr, I’m being chased by a monster! A monster’s after me. Help!

Rob: What kind of monster is it? Is it Anne of Green Gables?

Cameron (as Anne): No, I’m Anne of Green Gables. (He resumes running)  Help, a monster!

Rob: What monster is chasing you, Anne?

Cameron (as himself): No, Daddy, you’re the monster. You’re chasing me.

Cameron (as Anne): Help, the Daddy monster’s after me.

Rob: (starts to chase, as a monster) Arrrgghh, I’m going to get you, Anne!

Cameron (as himself): Sonny and Joe are here now, you know.

(Sonny and Joe were Cameron’s imaginary friends.  They were a husband and wife lumberjack team who worked in northern New Brunswick)

Rob: They are? Where are they?

Cameron (as himself): Right here. (points to an empty space, beside him)

Cameron (as himself):  That’s Joe.

Cameron (as Sonny): Yeah, I’ve known her for about seventy-sixty months.

Rob: Oh, that’s a long time. Do you like Anne of Green Gables, Sonny?

Cameron (as Sonny): Yeah, I guess so.

Rob: Joe, do you like Anne of Green Gables?

Rob: Is that good or bad, Joe?

Cameron (as himself): I want to go outside and play on my bicycle.

Rob: You want to go outside and play on your bicycle, Anne?

Rob: Do you know who Anne of Green Gables is?

Cameron (as himself): I want to ride my bicycle.

Rob: Just tell me who Anne of Green Gables is.

Rob: Have you ever seen her picture anywhere?

Cameron: The Wendy’s sign. Can I go outside now?