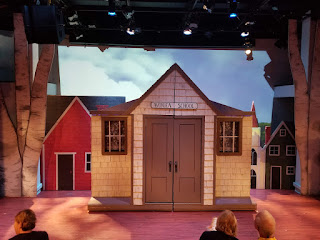 “The cast this year is amazing!”

That’s the buzz that’s going around for this year’s production of Anne & Gilbert the Musical, playing at The Guild until the fourth horseman arrives.

tl;dr – It’s really great, you should see it.

It’s really great, you should see it. This is a very strong year for Anne & Gilbert the Musical, bouyed by a very strong cast, and sharp direction.

I guess, though, that’s the price of having your name in the title of the show.

Thankfully, these “waiting around” parts of the show are full of wonderful songs, plenty of dancing, great acting, terrific dialogue and lots of fun.

Now for the part that the actors skim to, to find their name in the review (assuming anyone bothers to read this at all)

Rebecca Parent plays Anne to perfection. Willful, assured and in denial. That she finds 150 different ways to lie “I’m not in love with Gilbert Blythe” is a wonder.  And of course, a terrific singer.

Josh Wiles, as Gilbert, adds a depth to Gil’s conviction of love that I often found lacking in other actors’ portrayals of the character. And it turns out that depth of conviction really adds an emotional investment and empathy, at least from this audience member’s perspective. And of course, a terrific singer.

Rebecca Griffin wonderfully amps up the playfulness in Diana Barry. She is really good in this role, a pinnacle for future Dianas to attempt to emulate. If I was to have a very minor quibble, I would say I wasn’t quite as much a fan of her non-speaking portrayal of a tertiary collegiate student in Act Two. A bit too much comic face acting for my tastes.

Like Rebecca, Melissa McKenzie as Josie Pye is phenomenal, a totally captivating presence whenever on stage.  Through her performance, because of the genuineness and believability she brings to the character, I realized, this time watching, that Josie Pye is really the only character who truly changes and grows, from beginning of show to end of show.   Am I wrong to find this sort of problematic, from a theatrical point of view?

Morgan Wagner as Phillipa Gordon is, quite simply, masterful. Her talents make her a joy to watch.  And I suppose Phillipa is another character who changes in her time on stage, but her change is more an invention and convention of the plot than honest character growth.

Brandon Howard Roy is a super Royal Gardner. Often played as a villain of the story, this performance was successful in bringing empathy to the character. In all the times I’ve seen the show, it’s the first time I felt bad for Royal when Anne dumps him.

Shout out to Brennan Smith for his charming portrayal of Paul Irving. And kudos to the whole young company for being engaged and professional after 99 shows under your belts.

Cathy Grant as Marilla Cuthbert and Margot Sampson as Rachel Lyndeh are both very good. I feel, however, that they don’t strike as much a chord of connection with audiences this year because of the overall heightened comedic choices in direction.

Overall, Mark Fraser’s direction is on point. As is the choreography from Brittany Banks, and music direction from Aaron Crane. The show moves at a brisk pace, hits all the right notes, never drags.  It is truly a marvel of theatrics that so much happens in such a small, intimate space like The Guild.

I can’t fault Mark’s choice to amp up the comedic moments wherever possible, but a few times I think the comedy lessens the impact of some potentially emotional moments.

It really is a very strong production and I have no doubt you’ll really, really enjoy it.