Way back when, a century ago, I began a job as Creative Writer for radio on PEI. I started either in 1998 or 1999. I believe it was ‘99. That is not really important to this post, Rob.

I wrote with two other writers, Rod McGrattan – whom I’d continue working with until a few years ago when our jobs became redundant, and Cynthia King (Dunsford, at the time), who left the job a couple years after I started, to pursue other interests.

In those early days, when we had some down time, we’d play around on Microsoft Paint, each taking turns on either creating our own individual pieces of art, or working collectively on projects. One such collective piece was an attempt to capture the essences of our radio salesteam.

Here is the result, printed out on photo paper and left in the sun too long to fade and get dirty and such: 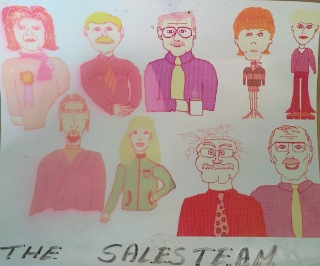